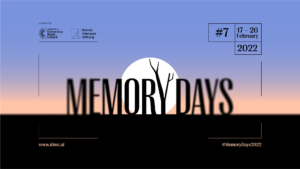 At the opening ceremony in Scanderbeg Square in Tirana on 17 February, PEMC president Marek Mutor delivered a welcome address to the participants. The next day he actively participated in the international conference “Communist myths, before and after the system change” which was held at the Tirana International Hotel.

On 18 February the PEMC international travelling exhibition “Century of Martyrs” was opened at the National Historical Museum in Tirana by Łukasz Kamiński, Wojciech Bednarski and Gjon Radovani from MEMO Center.

On 23 February the presentation of the Albanian language version of the Lest We Forget reader took place at Rogner Hotel for students, teachers and former persecuted people. The reader was presented by Dr. Łukasz Kamiński (PEMC) and Fatmiroshe Xhemalaj (expert in school curricula), Viktor Martini (former political prisoner) and Ylber & Shpresa Merdani (former politically persecuted).