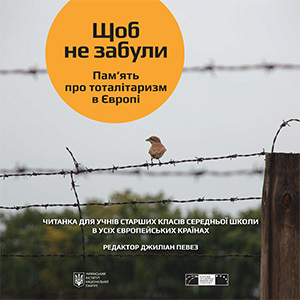 The Ukrainian version of the reader Lest We Forget was released in 2015.

Prague, 6 March – In the context of the Russian invasion of Ukraine, accompanied by false propaganda and disinformation, we are releasing a freely available Ukrainian story in English, German and Czech from our international educational reader Lest We Forget for teenage students anywhere around the world, in order to support educational efforts against the current aggression, which is also taking place in the field of recent history and against Ukrainian memory institutions.

The author of this text, historian Volodymyr Viatrovych, has now joined the Ukrainian territorial defence and is currently one of the soldiers defending Kyiv against the Russian troops. Volodymyr can be seen among other volunteer fighters in this news video published by the BBC on 27 February 2022.

The life story of Ukrainian teacher Oleksandra Radchenko (1896-1965) describes the survival of the Holodomor famine in 1932-1933. She wrote about those times in her diary, documenting the horrors of what was essentially a deliberate starvation of the people in Ukraine by Stalin. In August 1945 she was arrested and accused of anti-Soviet propaganda. She was sentenced to ten years in a Communist concentration camp. Oleksandra returned to Ukraine in August 1955 after completing the full term of her imprisonment. Due to her resulting poor health, she died ten years later.

← Statement on Russian aggression in Ukraine
During the 2022 Memory Days in Albania, the Platform presented the Albanian version of its educational reader and the Century of Martyrs exhibition →