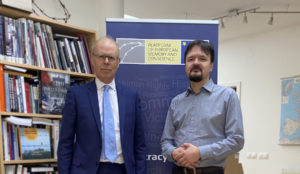 Prague, 14 October – Mr James Bartholomew, the director of the Museum of Communist Terror in London visited the Platform in Prague. He and  the Platform managing director Mr Peter Rendek discussed the current mutual cooperation in the field of education of the young generation about the tragic Communist past. The Platform is closely cooperating with the museum as a Platform member organisation as well as with its partners, such as the Foundation for the History of Totalitarianism, based in London. Later that day they both visited the “Red Tower of Death” memorial site in Jáchymov in the Karlovy Vary region, which served as a labour work camp for political prisoners in which they crushed uranium for later transportation to the USSR. This memorial site, which served for political prisoners in the 1950s is now a part of a broader area which was recognised as part of a UNESCO world heritage site in 2019.

The Museum of Communist Terror aims to keep alive knowledge and understanding of the deaths, terror and economic failure that took place under Communist regimes, primarily in the 20th century. The strategy is to do this through social media, its website, talks and films for schools and universities, lobbying for improvements in the teaching of the history of Communist regimes, events and the creation of one or more small museums leading up to the development of a full-size museum in London.