Prague, 12 October – The Executive Director of the Institute for Democracy, Media and Culture (IDMC) in Albania Ms Jonila Godole accompanied by the director of the Albanian office of the Konrad Adenauer Foundation Dr. Tobias Rüttershoff visited the Platform office in Prague on 12 October. They met with the Platform Managing Director Mr Peter Rendek, Mr Jan Kalous, director, and Mr Vít Fojtek from the Twentieth Century Memorial Museum, and Mr Pavel Žáček, historian and Member of Parliament of the Czech Republic.

During the working meeting the situation in terms of coming to terms with the communist past and the transition process in Albania and the Czech Republic was discussed. Ms Godole outlined the current situation in her country and informed about the official authorities’ approach in this area. 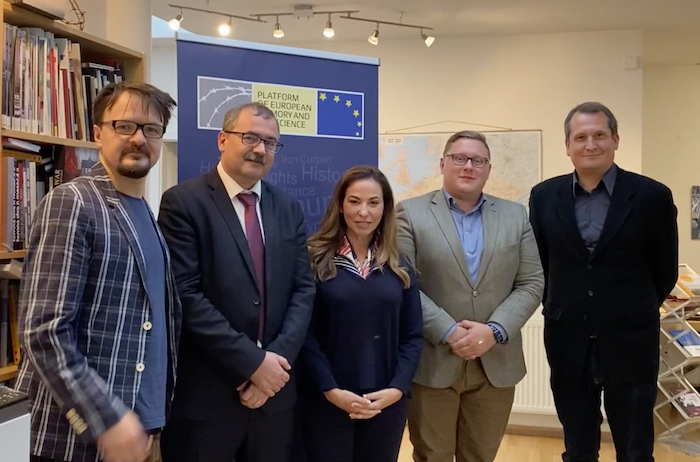 She identified the rehabilitations and compensations for victims of the communist regime as important, as well as a national memorial to all victims of communist atrocities, which are lacking in both Albania and the Czech Republic.

The Czech experience in the field of the creation of memorial institutions and a brief historical development were outlined by Mr. Kalous and Mr. Žáček. The latter also outlined possible further developments in the Czech Republic, after the last parliamentary elections, when the Communist Party failed to get into a democratic parliament after maintaining a presence for 30 years.

The Platform and Albanian IDMC are currently working on the preparation and publishing of an Albanian version of the reader for high school students Lest We Forget. The publication is expected to be finished before the end of the year and will be an interesting contribution to the educational process of the young Albanian generation.