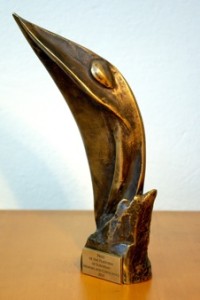 ouskaya was awarded the 2020 Prize of the Platform of European Memory and Conscience (PEMC) today in Prague during her official 4-day visit to the Czech Republic.

The Member institutions and organisations of the PEMC decided and voted earlier in 2020 to award the Prize of the Platform to Ms Tsikhanouskaya.

Ms Tsikhanouskaya received the Prize in recognition of her personal courage and her tireless efforts in advocating human rights and fundamental democratic values and freedoms during her campaign and after the last presidential elections in Belarus in 2020.

The Platform particularly recognises and endorses Ms Tsikhanouskaya’s current struggle to uphold fundamental human rights, which have recently been supressed in Belarus. The Platform hopes that the Prize will contribute toward support of all democratic movements in Belarus and trusts that the current political situation will finally lead to a peaceful solution with full respect for the will of the Belarusian people.

The prize was presented to Ms Sviatlana Tsikhanouskaya by the Platform Managing Director Mr Peter Rendek, who introduced her to the activities of the PEMC in the field of remembrance.

“We are ready for further cooperation and to share our historical experience of the fight against dictatorships,” said Mr Rendek. 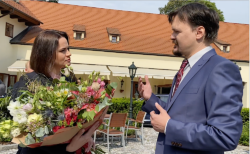 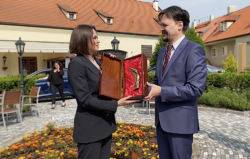 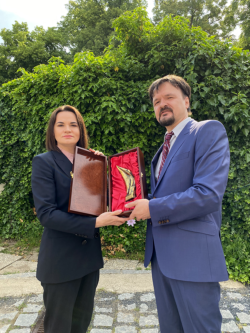 The Prize is awarded annually to a person/persons who are fighting today against totalitarianism, for the ideals of democracy, fundamental human rights and freedoms and the rule of law. The Prize of the Platform should support its winner(s) in their struggle, help to protect them against persecution and help to support international publicity of their cause.

The Platform of European Memory and Conscience brings together 68 (63 members, 5 candidates) governmental, public and private institutions and organisations from 14 EU Member States, Ukraine, Moldova, Iceland, Albania, Georgia, the UK, Canada and the USA working in the field of coming to terms with the legacy of totalitarianism on European soil.