Prague, Brussels – 25 May  – The Platform of European Memory and Conscience, together with the Informal group on European Remembrance of the European Parliament, an informal inter-party group, and following the 19 September 2019 European Parliament resolution on the importance of European remembrance for the future of Europe, today commemorates all heroes of the resistance against all forms of totalitarianism and pays full respect and tribute to all those who have shown their heroism and true love for humanity in the fight against tyranny.

On this day, 25 May, the Polish patriot Rotamaster Witold Pilecki (1901-1948), was executed. He actively participated in the resistance against Nazism and, after its defeat, against Communism. He was convicted for his actions in a fabricated political trial by the Communists and executed in 1948.

Countless women, men and children actively stood up, gun in hand, against Nazism, Fascism and Communism in the 20th century. After the Second World War, liberation brought freedom to only a part of Europe’s population. The other part, the eastern part, was freed from Nazism, but was replaced by another totalitarianism – Communism. The inhabitants of the countries in the East waited another 40 years for real freedom. In these countries, however, a part of the population put up active armed and unarmed resistance against the new form of oppression. To these heroes, dedicated to the idea of true freedom and patriotism, we pay our respect and give our thanks.

“European countries have a very different experience of WWII. When Witold Pilecki was executed by the Soviets, liberated Europe was laying foundations for the present day EU. Witold Pilecki is a symbol of brave fight against all forms of totalitariansim. His life is a testament to the horrors of both – Nazi and Soviet – regimes in Europe. But he was far from the only one. Many Europeans across the whole continent were fighting the brutality of World War II. Commemorating the 25th of May as the Day of Heroes of the Fight against Totalitarianism gives an opportunity to remember them and to tell about them – their stories – to our young generation. In 2019, the European Parliament supported a resolution on the Importance of European Remembrance for the Future of Europe with an overwhelming majority, calling to establish today as a day of commemoration. By celebrating the courage of those who stood up to both Nazi and Soviet regimes, we take an important step towards a common European remembrance and identity. Identity based on a committment to never let such horrors be repeated again,” said Ms Rasa Juknevičienė, MEP, Coordinator of the “European Remembrance” group in EP.

““Witold Pilecki was once called one of the most courageous heroes of the Second World War. He was the only volunteer to the Auschwitz Nazi Camp. His goal was to provide intelligence about the situation in the camp and to create a resistance movement within. After two and a half years, he escaped from Auschwitz and rejoined the Polish underground army. Pilecki also bravely fought in the Warsaw uprising. After liberation from German captivity, he agreed to take on another dangerous mission: he returned to Poland under Soviet occupation, this time to gather information for the Polish authorities in exile. Witold Pilecki was arrested by the communist secret police in 1947. After a brutal investigation, he was sentenced to death and executed on 25 May 1948. His remains have not yet been found. But we remember Witold Pilecki not only as a courageous fighter. He was also a loving husband, a caring father, an active member of his local community, and even an artist. Witold Pilecki was not the only one who stood up against totalitarian systems in the name of basic values: freedom, human dignity, truth, and justice. Let us remember these heroes not only to pay them due respect but also to draw inspiration from the example they set,” said Mr Łukasz Kamiński, President of PEMC

In addition to Witold Pilecki, we present short biographies of five women and men who, in their respective countries, resisted the onset of a new form of “unfreedom”. Many of them paid the ultimate sacrifice for it. 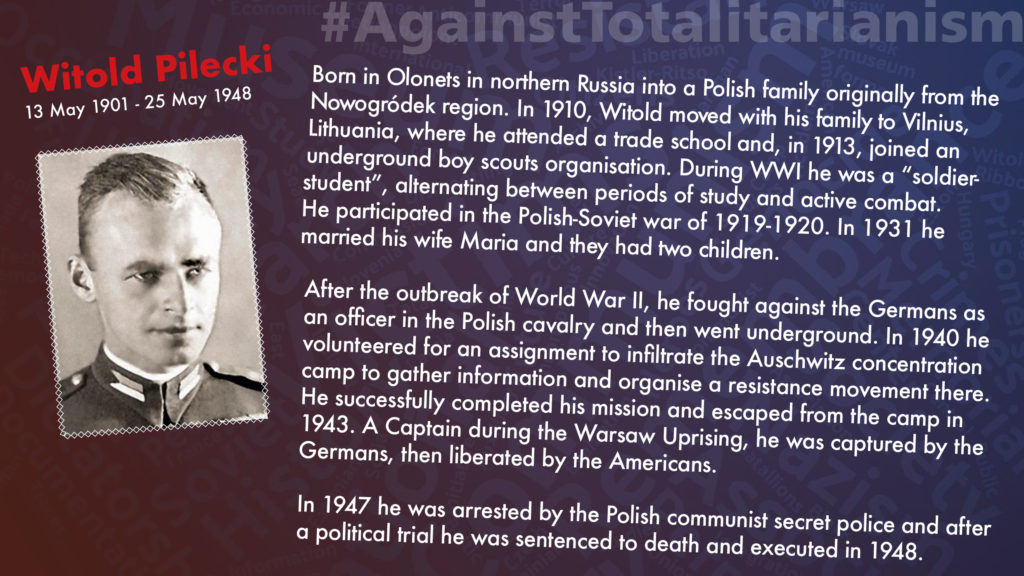 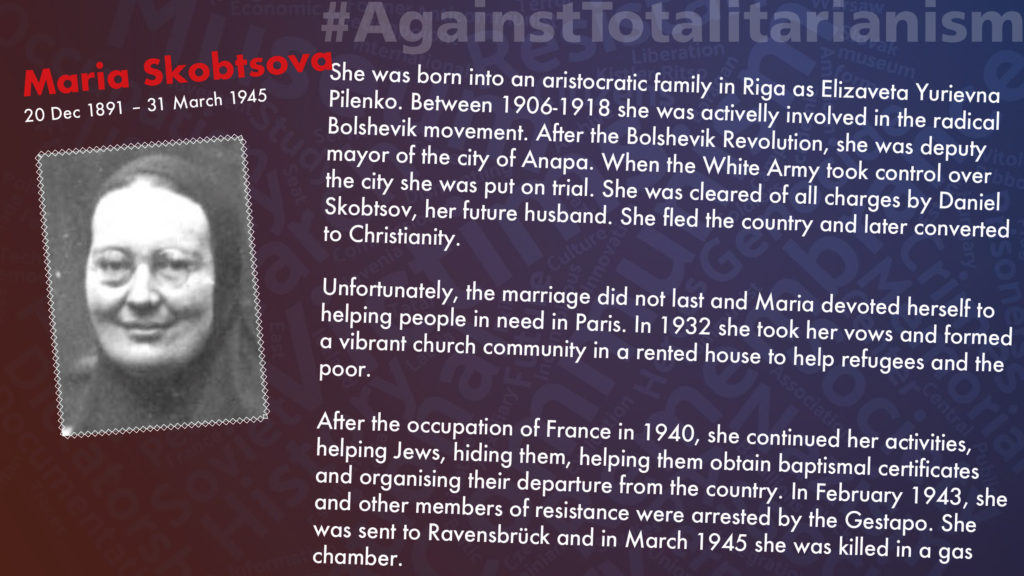 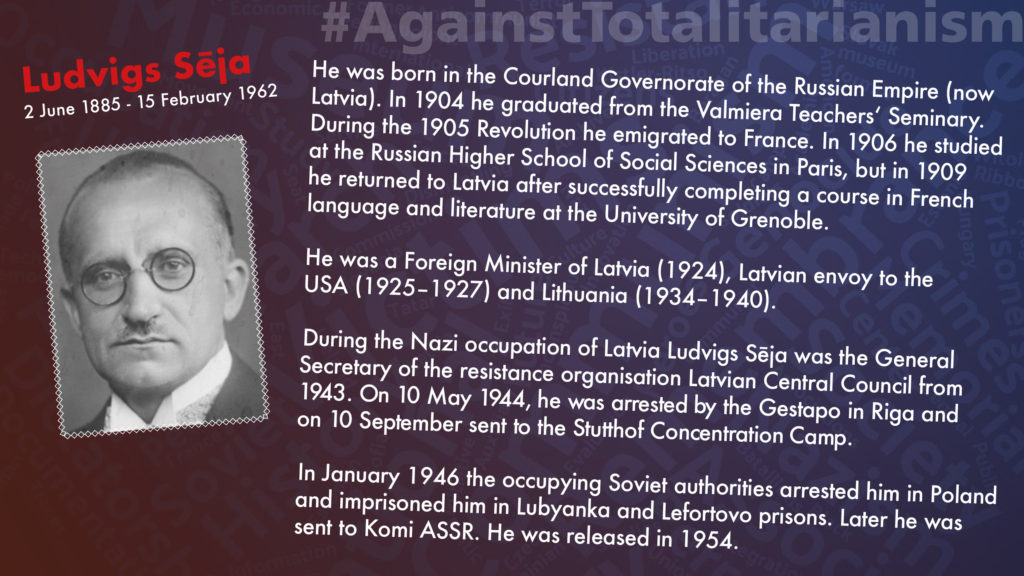 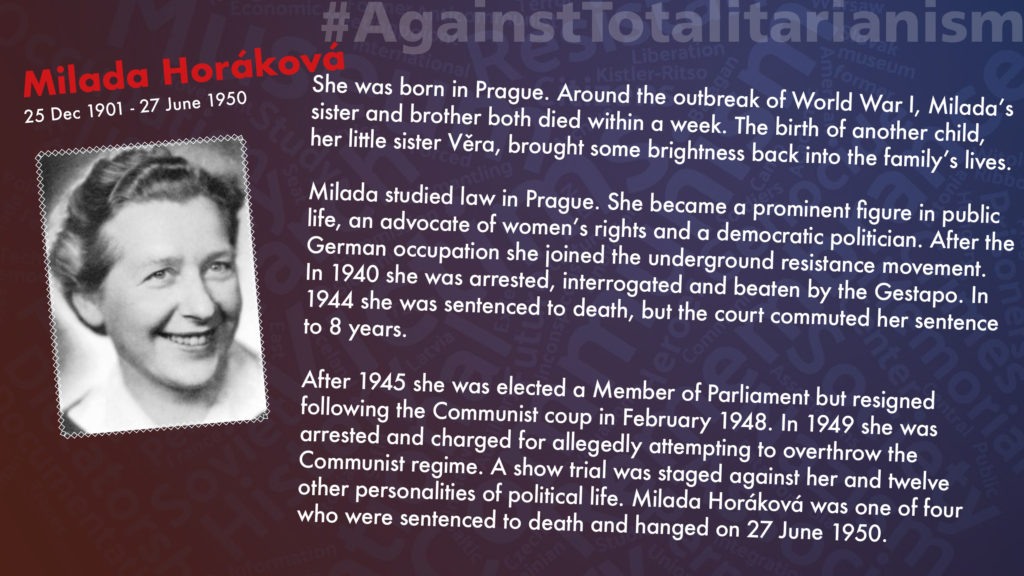 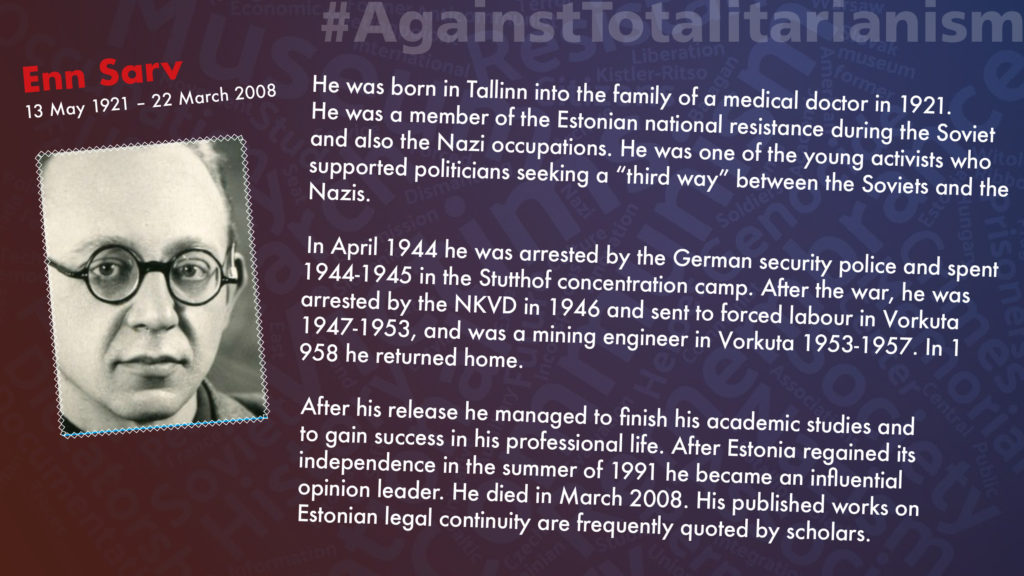