Prague/ Timișoara, 31 December 2020 – On the occasion of the 31st anniversary of the 1989 Timișoara Revolution, the Platform (PEMC) altogether with the Hungarian National Council of Transylvania (EMNT) and the Timișoara Society organised an international online conference and the presentation of the new Romanian version of the ‘’Lest We Forget’’ reader on 15 – 16 December 2020. The conference was simultaneously translated into English, Romanian and Hungarian.

The conference was hosted by László Tőkés, the president of the EMNT. The event discussed the suppression of (religious) minorities under Communist dictatorships, the legacy of the Timișoara revolution as an inspiration for the wider regional struggle against totalitarianism, and the contemporary remembrance of these processes, including the challenge of limited continued coverage from certain parts of our continent as a challenge to our shared European heritage.

“Thanks to 1989, the real re-unification of Europe became possible. Without the risks taken by the inhabitants of Timișoara it would not have been possible to heal our continent. They came from a desire to once again be part of Europe,” said the PEMC president Dr. Łukasz Kamiński during the conference.

At the same time, the Conference also served as the official reveal of the new Romanian edition of the PEMC’s “Lest We Forget” reader for secondary school students about the legacy of totalitarianism in Europe.

The Conference hosted a simultaneous translation service, which enabled English, Hungarian and Romanian audiences to interact and exchange perspectives without linguistic barriers.

The event was a great success and was attended by a large number of participants via the Facebook stream and on the Zoom platform.

You may view the Conference in its entirety below (without EN translation): 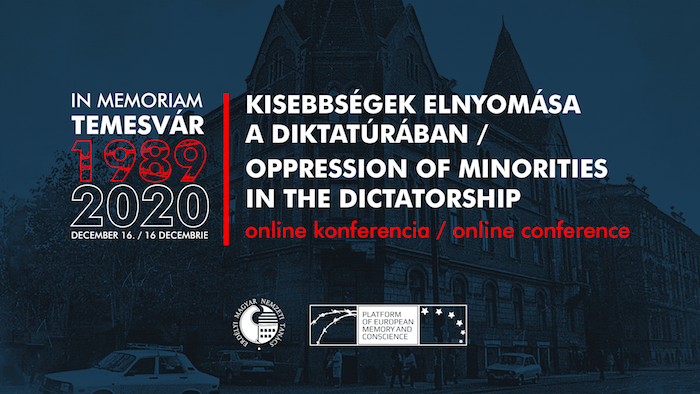 Programme of the conference

Suppression of minorities in the dictatorship

Suppression of religious communities in the dictatorship

← Call for Applications: Internship at the Platform of European Memory and Conscience
Czech Police prosecuting Communist Party ideologue Jan Fojtík for shooting at the borders before 1989 →