Oradea/Nagyvárad, 25 February 2019 – The 100 million victims of Communism were remembered at a memorial plaque placed on the wall of the inner court of the Partium Christian University on 25 February in Oradea city, Romania. The commemoration event was opened by Mr József Nagy, President of the Hungarian Civil Association.

“The future generation can only live in freedom if it is aware how horrible Nazism and Communism were. The horrors of the Holocaust will be no less, if we remember the horrors of Communism in a worthy way,” said Mr Zsolt Szilágyi, member of the Executive Board of the Platform of European Memory and Conscience. He laid stress on the issue that the West is still using double standards when it comes to totalitarian regimes. Karl Marx is seen as a kind of philosopher, his statues are inaugurated, even though he was the first to say that the past must be completely abolished, even by force if necessary. With this, Marxist ideology laid the foundations for the modern-day genocide.

Mr Szilágyi also pointed out that many believe that Gulag camps existed only in the Soviet Union. This misconception has to be dispelled; that is why it is planned, in cooperation with the Hungarian National Remembrance Committee, to present the devastation of Communism, how many internment and death camps existed in Central Europe, and how the totalitarian regime tried to destroy Christianity.“Christian persecution in Europe is not new. Communists brought it to perfection on an ideological basis,” he said. He added that as long as the Romanian Socialist Party, the successor of the Communist Party, does not return the seized property to the Church, or provide monetary compensation, we cannot talk about full freedom.

“We should never forget the horrors that our ancestors suffered was actually a sacrifice for our freedom,” he concluded. As the final act of commemoration Mr Zsolt Szilágyi, on behalf of the Platform of European Memory and Conscience, placed a wreath on the Plaque of the Victims of Communism. 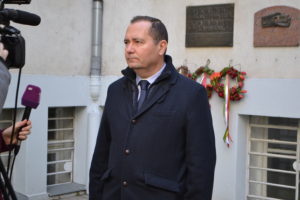 ← Commemoration of the 71st anniversary of the Communist coup in Prague
Justice 2.0 working meeting in Wroclaw on 21-22 March 2019 →