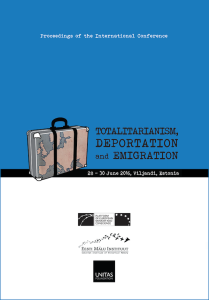 The annual international conference of the Platform of European Memory and Conscience on the theme “The forced displacement of populations and waves of migration in 20th century Europe caused by the policy of totalitarian states“ was held in the historic town of Viljandi, Estonia.
Co-organisers were the Estonian Institute of Historical Memory and the Unitas Foundation. A broad range of topics were considered at the conference, starting from the time of the beginnings of the Soviet Union until the collapse of the Eastern Bloc at the onset of the 1990s.

More about the conference here.