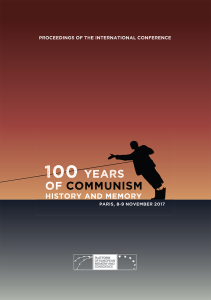 New publication: Proceedings of the international conference which was organised by the Platform and Prof. Stéphane Courtois, author and editor of the “Black Book of Communism”. The conference was organised and dedicated to the dark legacy of Communism and Communist dictatorships and was held on 8-9 November 2017 at the Collège des Bernardins and the Fondation Napoléon in Paris, France. Speakers were  historians, representatives of memory institutions and policy makers from France, Spain, Canada, South Korea, Russia, Ukraine, Poland, Latvia, Moldova, Romania and the Czech Republic. Special guest speaker was Finnish award winning novelist Sofi Oksanen.

During the conference, the new 500-page biography “Lenin, the Inventor of Totalitarianism” by Stéphane Courtois was introduced…

More about the conference here.

← Proceedings of the international conference Totalitarianism, deportation and emigration
Italian version of Platform reader Lest We Forget released →