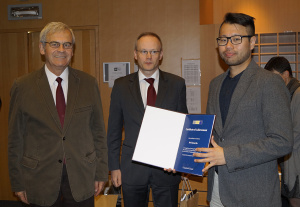 Brussels/Prague 25 April 2018. The presentation of the top-ten ranking entries in the Platform’s competition for a proposal of a Pan-European Memorial for the Victims of Totalitarianism in Brussels took place yesterday afternoon at the European Parliament in Brussels, courtesy of Mr László Tökés, MEP.

The goal of the competition was to propose the first-ever pan-European memorial for all victims of 20th century totalitarianism in Europe on the Place Jean Rey, in the heart of the European district in Brussels. The memorial will also celebrate the process of European integration as an achievement made possible by learning from the lessons of the past.

The presentation included the designs that won first place by Tszwai So from the United Kingdom, second place by Sabina Tanovic and Dario Kristic from the Netherlands, third place by Mantas Maziliauskas, Povilas Šorys and Gitana Stankiene from Lithuania, as well as the seven entries that gained fourth to tenth place. The representatives of Czech, Lithuanian and Polish embassies were present, as well as Members of European Parliament Milan Zver and Petras Auštrevičius.

“I strongly believe that our competition is a crucial step on the way to realising this project and we will have the opportunity to meet at the ceremony for launching the memorial in the near future,” said Platform President Łukasz Kamiński.

“It is natural that we will have a monument commemorating the victims of totalitarian regimes, as the death of the victims was created by terror, hate and those killing systems which produced millions of crimes are also condemned by the next generations and by history. This is the least that we can do,” remarked Mr László Tökés, MEP, while opening the event.

The Platform’s Managing Director Neela Winkelmann sent a letter to the participants in the presentation. She wrote, among other things: “It is through art that we can convey the most meaningful educational messages to the broadest audiences and I am pleased that our competition gave rise to so many diverse and highly qualified entries. I was humbled by the depth of meaning and variety of interpretation presented by the authors.”

The overall winner Mr Tszwai So from Spheron Architects in the United Kingdom stressed that preparing his work would not be possible without the support of the institutions and individuals who responded to his request for help by allowing him to use as many as 40 thousand letters of the victims from their archives.