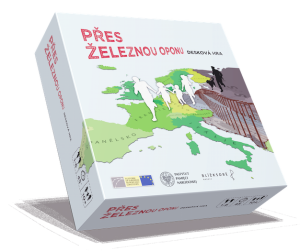 Prague, 20 November 2017 – On 16 November, the eve of the anniversary of the Velvet Revolution, the Platform of European Memory and Conscience held in Prague a Czech première of a unique board game Across the Iron Curtain. Produced by the Platform and the Polish Institute of National Memory, the game is play-and-learn opportunity to acquire deeper awareness of history and human rights related to Communist régime. The game is currently available in English and Czech. More about the game here.

The Czech launch entailed two tailored events in Prague. The first presentation brought together over 40 pupils from high schools the cities of Liberec and Ostrov nad Ohří. The latter, located on the Czech–German borderlands, was among the sites of illegal border crossing of refugees during the Cold War. Dr Neela Winkelmann, the Managing Director of the Platform and Ms Marcela Murgašová, the Director of the BLÍŽKSOBĚ foundation, introduced the historical and social context of the game. The highlight was the testimony offered by the key note speaker, Mr Alexander Wiegand, who was trafficking refugees in the late 1960s until his arrest in the early 1970s.

The afternoon session, held emblematically at Academia bookstore at the Wenceslas Square, focused on mature audiences. The panel discussion chaired by Dr Neela Winkelmann of the Platform, included Mr Alexander Wiegand as the key note speaker, Mr Martin Vohánka, Board Chairman of the foundation Blíž k sobě [Closer to Each Other] and Dr Petr Blažek, historian from the Centre for the Documentation of Totalitarian Regimes. 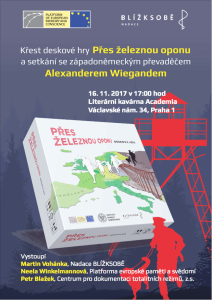 In his opening address, Martin Vohánka explained that he was drawn to establish his foundation that supported the production of the board game, in recognition of the democratic system that enabled his private enterprise to thrive for decades. Alexander Wiegand (1941) shared his experiences of trafficking in the late 1960s and early 1970s over 120 East Germans, Czechs, Slovaks, and Soviet Germans to West Germany. He served 4,5 years of his six years sentence in Czechoslovak prisons, being subjected to severe psychological and physical torture. He has received a number of major awards for his humanitarian effort during the years of the Cold War. It was during his recent visit to Prague that he saw, for the first time, his police file amounting to over 400 pages compiled by the Czechoslovak secret service. Petr Blažek took the audience through the files and explained the wider context of the case.

Echo in the Media

← Platform Managing Director Neela Winkelmann receives Masaryk Award of the Czech and Slovak Association of Canada on 8 November 2017
Memorandum from the conference ”100 Years of Communism. History and Memory” held on 8-9 November 2017 in Paris, France →