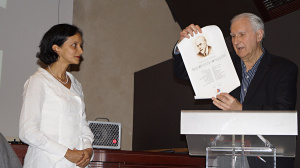 Paris, 8 November 2017. At the occasion of the conference “100 Years of Communism. History and Memory” held in Paris, France on 8-9 November 2017, Platform Managing Director Dr. Neela Winkelmann, née Heyrovská received the Masaryk Award of the Czech and Slovak Association of Canada (ČSSK) from ČSSK Vice-Chairman Miloš Šuchma.  The Prize was awarded to her during the 66th Congress of the ČSSK held on 9-11 June 2017 in Edmonton, Canada.

The Masaryk Award is named after the first President of Czechoslovakia, Tomáš Garrigue Masaryk. The dedication reads: “This distinction is awarded to Canadians of Czech or Slovak origin who have reached important achievements in an area of human activity, and to persons or organisations of any origin who have rendered services to free Czechoslovakia or who have enriched the life of Czechs and Slovaks in Canada.” 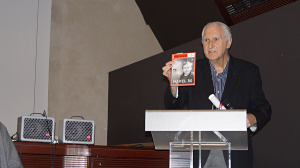 Other laureates of the Masaryk Award in 2017 were Lenka Storzerová, honorary Vice-consul in Victoria, British Columbia; Edward Brabec, Chairman of the ČSSK in Edmonton; Professor Pavel Jelen, Czech-born expert in food engineering and technology; and Charta 77, the Czechoslovak dissident movement criticising the official etablishment in Communist Czechoslovakia for violations of human and civic rights.

← Call on former East German refugees arrested in Czechoslovakia until 1989 to apply for rehabilitation and compensation
Czech première: Across the Iron Curtain →