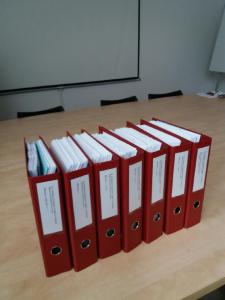 Brno, 21 September 2017. The Platform of European Memory and Conscience filed a criminal complaint today with the Supreme state prosecutor’s office of the Czech Republic in Brno against the last living members of the presidium of the Central committee of the Communist party of Czechoslovakia Milouš Jakeš, Lubomír Štrougal and Peter Colotka, as well as further responsible persons, for the killing on the borders of Communist Czechoslovakia as imprescriptible crimes against humanity. This is a new attempt to reach justice after the Office for Documentation and Investigation of Communist Crimes concluded the investigation of a similar complaint from 2008 last year with no results.

The criminal complait concerns 28 cases of civilians of various nationalities who died on the Czechoslovak borders with West Germany and Austria in the years 1965-1989. They lost their lives in various ways: they died by electrocution on the Iron Curtain, they were shot and killed, they drowned, they were shot down in a plane, they died while attempting to cross the border in a car or they committed suicide under siege.

For these victims, Platform researchers have found the responsible persons in the chain of command, starting with the intervening Border guard patrols, to the commanders of the Border guard, deputy ministers and ministers of interior to the members of the presidium of the Central committee of the Communist party (CCCP). The Platform also newly discovered documents of the presidium of the CCCP which prove the direct responsibility of its last living members Milouš Jakeš, Lubomír Štrougal and Peter Colotka for the decision making about the maintenance and improvement of the system of border protection.

By the criminal complaint, the Platform of European Memory and Conscience would like to achieve that the Czech Republic becomes the second European country after Germany which will consistently sentence the perpetrators on all levels of command and political representation of the totalitarian state for the killing of civilians on the Iron Curtain. The Platform considers this an important contribution toward raising the moral standards in post-totalitarian democracy.

Echo in the Media