In the XXth century, millions of people fell victim to totalitarian regimes. Both Communists and Nazis not only killed innocent people of any gender, social status, age etc., but tried to erase the memory about them. For this reason, most victims were buried in mass graves, without any markings. Despite the passage of time, not all of them have been found and a majority of the remains have not been identified.

The Platform of European Memory and Conscience decided to launch the “Totalitarian Mass Grave Sites” initiative to raise awareness and to fight anonymity of the victims. The successful genetic identification projects of the past few years proved it feasible. We believe that by common effort it is possible to return the victims their names and overcame, at least in this aspect, the legacy of totalitarian systems.

This website is not the first project of this kind however, it is the first one to include information from every country affected by totalitarianism. Trough this we aim to visualise the terrifying scale of the crimes committed by Communists and Nazis.

The pilot version of the project shows information about 154 sites across the Europe. Plus we included the locations in former Yugoslavia (Croatia, Bosnia and Herzegovina) which are connected to mass killings shortly before or after the end of WWII. 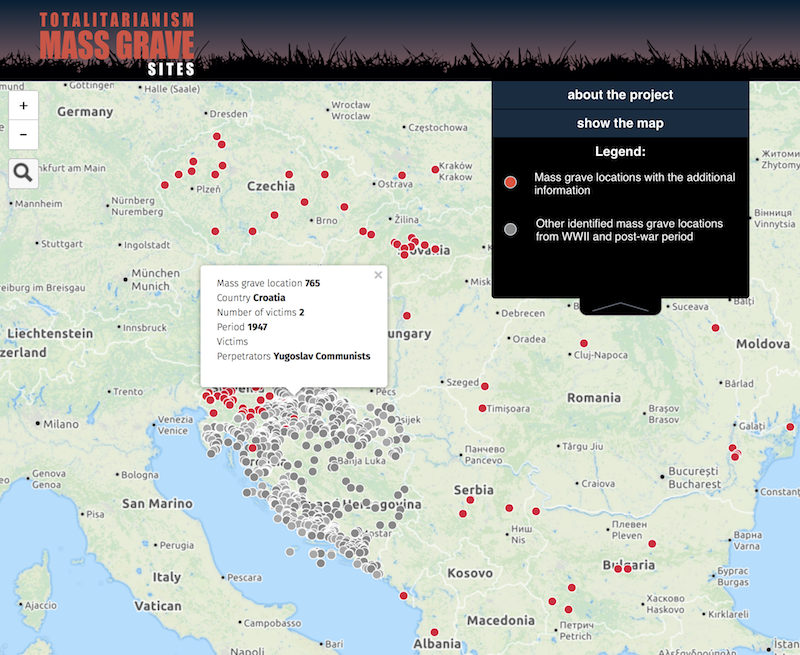 ← Competition for a memorial for the victims of totalitarianism in Brussels receives patronages from EU Commissioner and the Ambassador of the Czech Republic to Belgium
Platform files criminal complaint against last surviving Czechoslovak politburo members Jakeš, Štrougal, Colotka and further persons for killing on the borders →