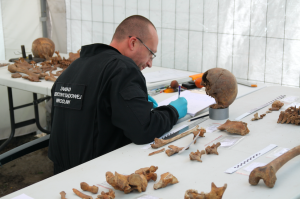 Prague/Warsaw, 16 June 2017. At a meeting with the Institute of National Remembrance IPN in Warsaw earlier this week, the Platform of European Memory and Conscience handed over documents pertaining to the killings of 13 Polish citizens who died on the Czechoslovak electrified Iron Curtain on the border with Austria between 1961-1965. The IPN and its subordinated Main Commission for the Prosecution of Crimes against the Polish Nation is ready to exhume the remains of the Polish victims of the Iron Curtain in Czechoslovakia.

At a meeting in Warsaw on Monday with prosecutors led by Andrzej Pozorski, Director of the Main Commission for the Prosecution of Crimes against the Polish Nation, Platform Managing Director Neela Winkelmann handed over to the IPN documents related to the deaths by electrocution of 13 Polish citizens in the years 1961-1965, when the Czechoslovak Iron Curtain was charged with electric current of 4,000-6,000 V. The main surviving responsible person is former Minister of Interior and later Prime Minister of Czechoslovakia Lubomír Štrougal (*1924).

The Institute of National Remembrance has an expertise in exhuming and identifying victims of totalitarian crimes from unmarked sites and mass graves, for the purpose of criminal investigation and a dignified re-burial.

“The Institute of National Remembrance is keen on locating and exhuming the remains of Polish refugees killed on the Iron Curtain in former Czechoslovakia. Platform researchers will provide the necessary information as soon as possible,” says Platform Managing Director Neela Winkelmann.