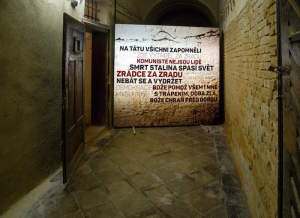 Brno, 21 February 2017 – The Platform and its Czech member organisation Paměť (Memory) commemorated the Nazi and Communist victims and those who were executed in the former Cejl prison in Brno.

The former prison building on Cejl Street in Brno, which is located close to the city centre, served as a prison between the years 1784 and 1956. During WWII the building served partly as a German prison. After the Communist coup of 1948 dozens of political prisoners were imprisoned here. Executions took place here until 1952. In the late 1950s it became a depository for the Moravian state archive. Later on it was abandoned and left to decay.

Current plans and attempts try to turn this site into a commercial and business zone. The Platform together with its member institutions and other persons have appealed to politicians to preserve this historic place as a memento of two totalitarian regimes. As a result of the appeal, the building was declared a national heritage monument in 2016.

The commemoration event was attended by the Lord Mayor of Brno Mr Petr Vokřál, former prisoners, family members of former detainees and of those executed in Cejl, as well as historians and the interested public. Ms Neela Winkelmann, Platform Managing Director expressed the Platform`s support of the plans for turning the prison building into a memorial.