Milan Štěch, President of the Senate of the Parliament of the Czech Republic,

Jan Hamáček, President of the Chamber of Deputies of the Parliament of the Czech Republic,

Tibor Pető, Ambassador of Hungary to the Czech Republic and

The Platform of European Memory and Conscience

cordially invite to a

The main aim of this conference is on one hand to commemorate the 60th anniversary of the 1956 revolution and freedom fight against the Soviet oppression and occupation in Hungary; on the other hand to give a broader comparative insight into the analogous uprisings throughout the region in the 1950s and their possible impact of the democratisation attempt of what we call Prague Spring. What was common in the 1953 Berlin, the 1956 Poznań and Budapest uprisings? Why did the revolutions in different countries lead to a different outcome? How did these attempts determine the following decades in the life of the respective Communist countries? What was common in these revolutions and why did a revolution not take place in the Czech Republic? How does the common history of the countries in the region determine their present role/position in the European Union?

Dr. László Bukovszky (SK) historian, Government commissioner for minorities – The international assistance of the ŠtB during the revolution and after its crushing
Prof. Károly Szerencsés (HU) historian, Faculty of Humanities, Eötvös Loránd University Budapest – The Communist system in Hungary in light of the revolution
Dr. Petr Blažek (CZ) historian, Centre for Documentation of Totalitarian Regimes – Prague Spring 1968 – possibilities and limits
Rev. László Tőkés (RO) leader of the Romanian revolution of 1989, Member of the European Parliament – Counter-revolution in Romania 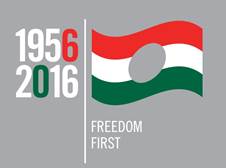