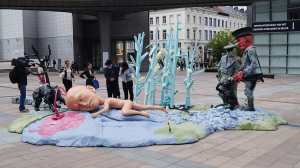 Brussels / Prague, 29 May 2015. Prominent Czech artist group Pode Bal and the Platform of European Memory and Conscience are presenting a modern art installation on the Esplanade Solidarność in front of the European Parliament in Brussels. The work of art is to remind the general public and policy makers of the unpunished crimes against humanity committed by the Communist regimes.

Hartmut Tautz was 18 years old when he was killed while trying to escape from East Germany to the democratic world on the Czechoslovak – Austrian border in August 1986. He was badly injured by specially trained border guard dogs and left to die without medical help. Responsible persons all the way to the top of the leadership of the Communist party of Czechoslovakia are alive today, citizens of the European Union.

The sculpture was installed based on a request of 35 Members of the European Parliament from 14 countries. It was inaugurated in the presence of the mother and sister of Hartmut Tautz by EU Commissioner for Education, Culture, Youth and Sport Tibor Navracsics on 27 May 2015.