Prague, 10 September 2012. The Platform of European Memory and Conscience, the Institute for the Study of Totalitarian Regimes (CZ) and the Ján Langoš Foundation (SK) cordially invite to the solemn opening of the international travelling exhibition Totalitarianism in Europe which will take place on 17 September 2012 at 4 p.m. at the Aréna Theatre, Viedenská cesta 10, 851 01 Bratislava, Slovakia (www.divadloarena.sk).

The exhibition presents the statistics of the victims of the gravest crimes of 20th century Fascism/Nazism and Communism from 12 EU Member States. It is conceived as a black album, presenting, on individual pages per country and totalitarian regime, the victims, some of the main persons responsible for the crimes and the prosecution of perpetrators after the fall of the regime.

The exhibition is accompanied by a screening of short documentary films on the topic of crimes of the totalitarian regimes from different countries. The exhibition, prepared by around twenty institutions and organisations associated in the Platform of European Memory and Conscience, is addressed to the broad public: its aim is to educate about the criminal nature of the totalitarian regimes and about the interconnection of both European totalitarianisms of the 20th century. Its goal is to increase the awareness about this grave common European legacy and about the importance of upholding fundamental human rights, to promote better understanding among citizens of Europe and to help prevent any possible rise of totalitarian rule in the future. The project has been kindly supported by the International Visegrad Fund and the European Commission’s Europe for Citizens programme.

Speakers at the opening of the exhibition on 17 September 2012 will be Daniel Herman, Director of the Institute for the Study of Totalitarian Regimes, Filip Vagač, Slovak Government Commissioner for Civic Society and Trustee of the Ján Langoš Foundation, Göran Lindblad, President of the Platform of European Memory and Conscience and Friso Roscam Abbing, Head of the Communication Department of the Fundamental Rights Agency of the European Union. The exhibition will be open to the public in Bratislava at the Aréna Theatre until 11 October 2012, one hour prior to the theatre performances. 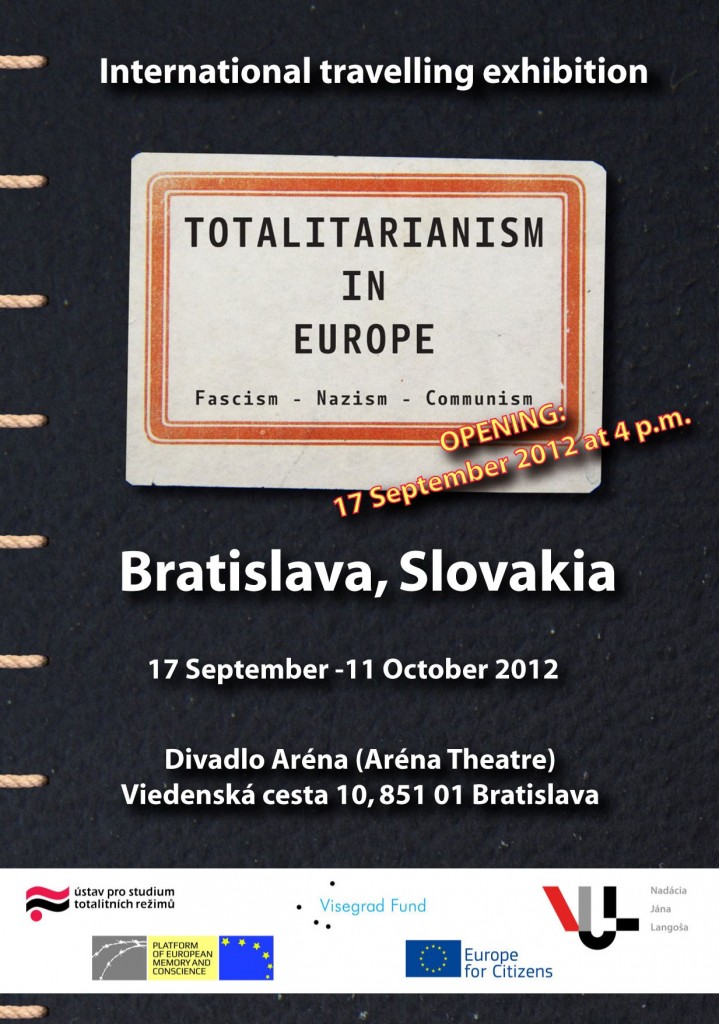