Proceedings from the international conference (www.crimesofcommunism.eu) held in Prague on 24-26 February, 2010 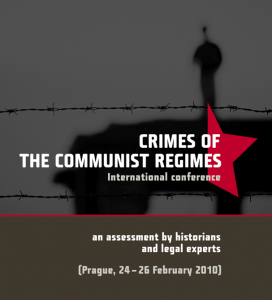 The conference was organised by the Czech Institute for the Study of Totalitarian Regimes in cooperation with partner institutions and organisations from the working group on the Platform of European Memory and Conscience. The book, which was published with the kind support of the European Commission Representation in the Czech Republic, contains more than 40 contributions by historians, witnesses of crimes, investigators and legal experts from three (four) continents. It includes country reports on the crimes committed in the individual countries of Central and Eastern Europe and legal analyses and recommendations on how to deal with the unresolved legacy of Communism. The publication concludes with the Declaration on Crimes of Communism adopted by the participants of the conference.

← Czech Prime minister Petr Nečas: The years of totalitarianism were years of struggle for liberty
Representatives of the Platform →