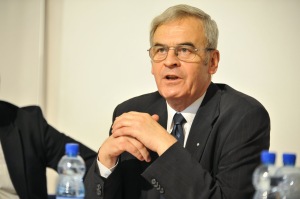 Prague / Oradea, 21 March 2016. The Platform of European Memory and Conscience is concerned about the announced revocation of the Order of the Star of Romania from László Tőkés, MEP. Bishop Tőkés received the medal for his role in the fall of the Communist dictatorship in Romania. The Platform appeals to the President of Romania to uphold the freedom of speech of Mr Tőkés and to support the promotion of historical truth and justice.

The President of Romania has announced that he would withdraw the medal bestowed upon Bishop László Tőkés, MEP, for his key role in the fall of the Ceausescu regime. The revocation comes as a surprise retaliation for a statement made by Mr Tőkés regarding the Hungarian minority in Romania. In 2013, Mr Tőkés had asked Hungary to give more protection to the ethnic Hungarians in Transylvania. The Platform is convinced that Mr Tőkés was exercising his right to freedom of expression as guaranteed by the Constitution.

Mr Tökés and the Platform recently wrote to the President of Romania, asking him to finally de-classify the records of the Romanian revolution during which more than 1,100 civilians were killed and over 3,500 wounded.

„Revoking the medal from Mr Tőkés would be a worrying signal. His leadership in the struggle for freedom and democracy in 1989 remains a fact. We appeal to President Iohannis to uphold historical truth as well as justice for the victims of the Romanian revolution ,“ says Platform President Göran Lindblad.

The Timisoara Society, Romanian Member organization of the Platform, released a statement highlighting the fact that while many other persons convicted for corruption or other crimes remain decorated, the President is revoking the state distinction given to László Tőkés᾿ for his historical role played in 1989. They asked the President to review the list of decorated persons and to withdraw state distinctions from those who collaborated with the former Communist secret service Securitate or those convicted for corruption.