The Lithuanian Presidency of the EU Council held a ceremony on the occasion of 23 August, the European Day of Remembrance for the Victims of Totalitarian Regimes, in the presence of Ministers of Justice of the EU in Vilnius. On 22 August, a candle lighting ceremony took place at the monument to resistance fighters outside the former headquarters of the Gestapo and the KGB, today`s Genocide and Resistance Research Centre of Lithuania. On 23 August, Platform President Göran Lindblad opened the international travelling exhibition “Totalitarianism in Europe” in the presence of the justice ministers at a conference held in the Tuskulėnai Peace Park memorial complex. In the afternoon, Göran Lindblad and Neela Winkelmann opened the exhibition for the Lithuanian public. The Platform`s Reader for schools “Memory of Totalitarianism in Europe” was presented to all delegates by the Lithuanian EU Presidency. The official website of the event can be found here. 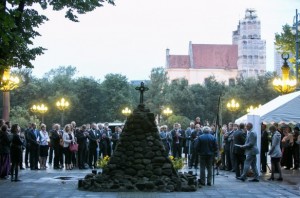 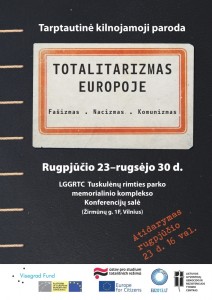 poster of the travelling exhibition in Lithuania